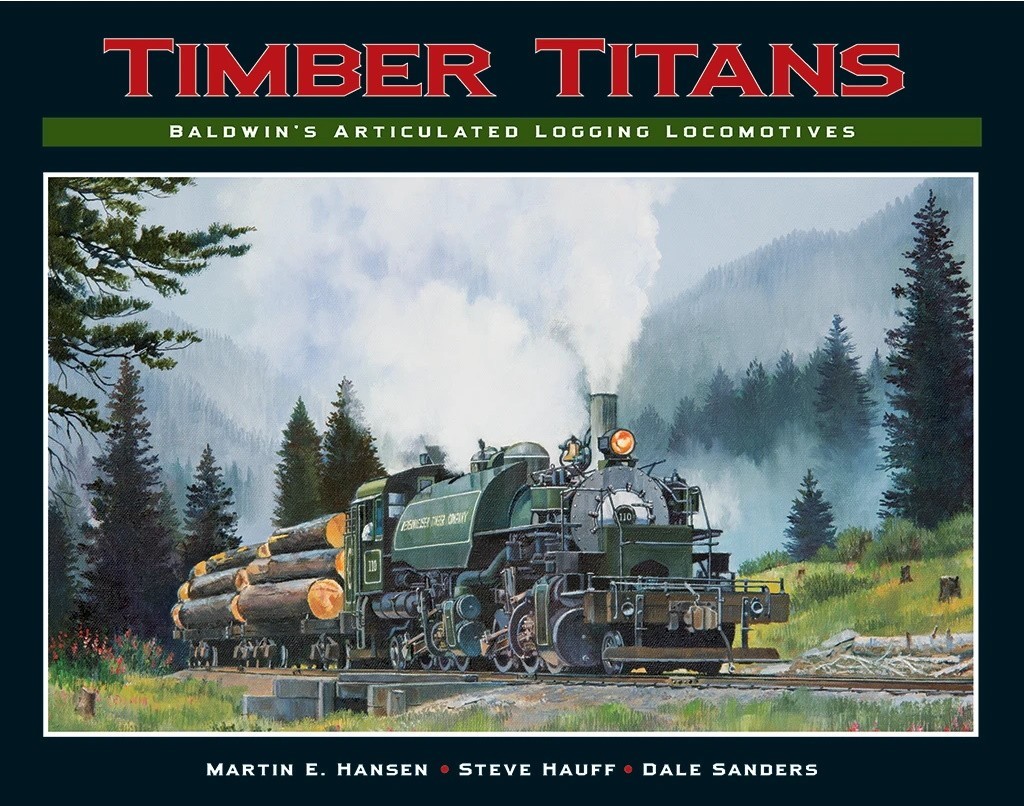 White River Productions is pleased to announce the second printing of Timber Titans: Baldwin’s Articulated Logging Locomotives. Thirty years in the making, this new hardcover publication tells the complete story of these fascinating logging locomotives. Presented in construction number order, the articulateds are covered individually in great detail with statistics and full histories that document each locomotive from the day it left Baldwin’s sprawling Eddystone, Pennsylvania, factory to its ultimate disposition.

Between 1909 and 1937, Baldwin Locomotive Works of Philadelphia, Pennsylvania, produced 44 specialized locomotives that were either built for, or later transitioned to, the rigors of hauling raw logs on railroads where the grades were steep and the curves many.  While all of these locomotives were built as articulated, they varied greatly in design and appearance. Most were built as compound articulateds (Mallets) but two companies, Weyerhaeuser Timber Company and Uintah Railway, received simple articulateds. Water carrying methods were also wide-ranging.  While most were built as tank locomotives, others were equipped with a separate tender.  Furthering the variations from as-built configurations, several of the tank locomotives were later converted by removing the side or semi-saddle tanks and adding a conventional tender. While most of the logging articulateds toiled away in relative obscurity, several gained acclaim for their well-traveled longevity.  Remarkably, ten of the locomotives have survived and several of those remain active more than a century after their construction.

Beyond the exhaustively researched text, Timber Titans: Baldwin’s Articulated Logging Locomotives features 455 black and white and color photographs that have been painstakingly restored to their original appearance. All have been reproduced in high resolution with many presented full page. Additionally, two full-color drawings, four three-dimensional renderings, and an original oil painting for the cover, were all commissioned specifically for this 256-page volume.

Timber Titans: Baldwin’s Articulated Logging Locomotives  retails for $79.95 (plus shipping and handling) and is available through your local dealer, online at http://shop.whiteriverproductions.com, or by calling toll-free (US) 877-787-2467. Outside the US call 1-660-695-4433.

White River Productions is pleased to announce the release of Alco Treasury: An exciting collection of stories about the American Locomotive Company (Alco) diesels and the railroads that use them. Throttle up and enjoy this exciting collection of Alco articles from the pages of Railfan & Railroad Magazine, with an introduction by noted author and photographer Greg McDonnell.

While Alco ceased domestic production in 1969, many of their designs continue to enjoy productive careers to this day, earning these classic diesels a loyal fan following from coast to coast. The glory days are gone, and their ranks diminished, but a half-century after Alco called it quits, their locomotives labor on. It’s a testament to the rugged nature of the machines and to the dedication of the keepers of the faith that maintain and operate these Alco survivors. Included in this volume are:

Winner By a Nose: Brian Lazarus explores the development and styling of Alco’s streamlined FA and PA diesels illustrated by vintage publicity photos and drawings.

When Alcos Came From GE: General Electric launched an extensive program offering rebuilt Alco Century diesels for a fraction of the cost of a brand new locomotive. Jim Rowland dives into the details of this short-lived program in a two-part story.

The Elusive Hammerhead: Gordon Lloyd, Jr., describes the unusual high-hood road-switchers ordered by Pennsylvania Railroad, Western Maryland, and Chicago & Northwestern, of which only one survives today.

Plaster City Alcos: Charles Freericks takes us into the desert to explore a gypsum mine that uses modern Alco designs running on three-foot gauge track.

From Cartier to Cohocton: Jime Rowland details the saga of the “Gang of Eight,” a hearty fleet of six-axle MLWs that journeyed from Canada to enjoy a second career on Northeastern short lines and regionals.

Genesee Valley Transportation: Charlie Wood takes us on a tour of one of the largest operators of Alco diesels hauling freight day in and day out.

Conrail Alcos of Conway: Greg Dziomba documented the fleets of six-axle Alcos assigned to trains out of Conway Yard during Conrail’s first years.