Robbo Roberts
Editor
posted on 1 year ago — updated on 1 year ago
922
views
Adie Roberts looks at two of his favourite subject’s trains and war all combined in one book to see what else he can find out about this fascinating subject. 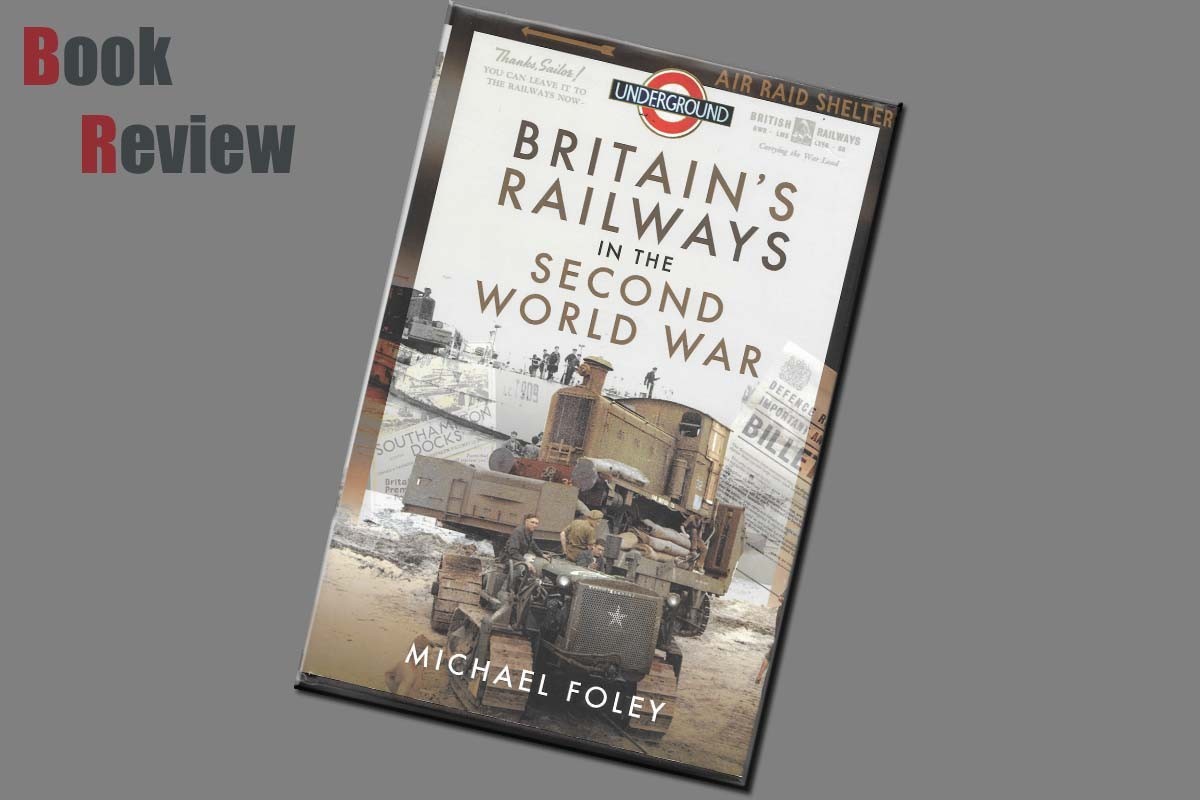 Trains have served in wars all around the world and way before the second World War started. Armoured and armed trains saw use during the 19th century in the American Civil War 1861-1865 the Franco-Prussian war (1870- 1871) the First and Second Boer wars (1880-1881and 1899-1902) BoerWar, Winston Churchill, then a war correspondent was travelling aboard an armoured train on 15 November 1899, when a Boer commando led by General Louis Botha ambushed the train. The Boers captured Churchill and many of the train's contingent, but many others escaped, including wounded soldiers who had been carried on the train's engine.

he French used them during the First Indochina War(1946–1954), and a number of countries had armoured trains during the Cold War. The last combat use appears to have been during the Yugoslav wars of the 1990s.

Michael Foley developed his interest in railways after training to be a guard on good trains. He later qualified as a teacher and spent much of his teaching career in primary schools in the East End of London. After leaving teaching to become a full-time carer to his twin grandsons who was severely disabled, He began to write seriously for the first time. Since then, he has had more than 30 local and military history books published. He has contributed numerous articles to magazines such as Best of British, This England, Essex life and Britain at war. He has also had some short stories published in my weekly magazine. In recent years he has written a weekly football column for the Havering post and the local and a weekly local history column for the Dagenham's post.

He lives in Romford with his wife and grandson.

The book from Pen and Sword is hardback with glued spine and pagination of 217.

The outbreak of the Second World war was of little surprise to most people as he had been expected for some time. In relation to the railway system in Britain, this was evident in their pre-war preparations and training for such things as air raids and gas attacks railway staff were the first non-military group to be supplied with steel helmets which demonstrates how important the railways were going to be during the conflict.

Just before World WarII, Britain's railways were run by four companies known as the big four these were

The Great Western Railway is commonly known as the GWR,

The London and North Eastern railway is commonly known as the LNER,

The London, Midland and Scottish Railway are more commonly known as the LMS

lastly, Southern Railway is more commonly known as the SR.

It had become evident to the military authorities that a reliable and large enough transport system was a vital necessity during wartime.  This had proved to be the case in all the wars that Britain had fought in since the railway came into existence and government control of the railways during the FirstWorld War had provided the experience and understanding of what would be needed in another war.

Blackout was strictly enforced on most aspects of the railways, there were, however, problems with the signal boxes. They were a unique type of building with wide windows to give a clear view of the lines they controlled. There was no way that the light in the signal box could be reduced enough to comply with blackout regulations as it would restrict the ability of the signalmen to operate safely.

Several experiments were carried out, including the use of ultraviolet Rays and levers covered with fluorescent paint. This did not work so it was decided that the only possible solution was that light was shaded off the windows and reduced to minimum necessary for the safe operation of the box. Signalmen were also given large metal boxes in which to shelter during air raids because of the large windows flying glass was a significant danger.

All around the UK were various military installations one of these was Shoeburyness which was an experimental artillery site with its own railway system for many years and was in use throughout the war as a coastal gunnery school.

Although the bombing of Britain by the Germans was anticipated once the war had broken out, there were already bomb attacks in the country. From 1939 to 1940, The Irish Republican army IRA carried out a sabotage campaign against the infrastructure of the United Kingdom to demonstrate their refusal to accept the legitimacy of the Irish partition. This involved threats and actual attacks on public services and structures such as power stations and electricity pylons, bank, hotels, shops, cinemas, museums, Royal Palace and all government buildings.

All transport systems and their locations were vulnerable. The railways were first targeted in February 1939, when bombs exploded in the London Underground stations of Tottenham Court Road and Leicester Square, also at Kings Cross station.

As the campaign continued bombs exploded at Midlands railway stations at Coventry, Nottingham, Leicester, Warwick, Derby, Birmingham, and Stafford, and again in London, at Victoria and KingsCross stations. The bombing campaign caused some fatalities and many more injuries.

In a tear gas attack on two Liverpool cinemas on May 5th 1939, a man was seen to let something fallout from his coat there was a then aloud explosion.  Some of a crowd of people leaving one of the cinemas took to chase the man who was apprehended by a railway policeman. A demonstration of how railway staff were already on the alert and prepared for attacks before the German bombing began.

The main railway terminal in London could not cope with the numbers so many evacuees were taken by road or train to other stations such as Richmond, Wimbledon, and new cross gate.

It was to be the greatest civilian movement ever undertaken by the railway system, with up to 75 trains a day taking evacuees from London, most of the evacuees went to Kent, Sussex and Devon

Away from the railway lines, there was more to railway engineering than just trains, a move towards production of military hardware in their workshops as early as 1937, the War Office had asked the LMS not to just make a tank but to design it as well.

The pilot A-14 medium tank was built at Crewe, before it had been finished, the War Office decided that it wanted a lighter and cheaper vehicle. The LMS then developed another tank, which was known as the Covenanter and under the ministry of supply coordinated the production of 1771 of these tanks by various companies although 161 of them were produced at Crewe.

At LMS Horwich works three other types of tanks were built A13 cruisers, Matilda’s, and Centaur's.

At the start of the blitz in early September 1940, so many people in London seeking shelter obvious place to find this was in the tunnels of the London Underground.

Taking shelter in the underground was not a new idea it had been used during the First World War when bombs fell from Zeppelin’s and, later, aircraft. The level of bombing in the Great War was of course nothing like the level it was in the Second World war.

Many unknown facts have come from this book which included the GWR railway works at Swindon were thought to be the largest in the world. Staff were lucky enough to have several benefits for themselves and their families such as a medical service that was supposedly the inspiration for the National Health Service.

The preparations for D-Day and the invasion of Normandy codenamed operation overlord was perhaps the biggest test faced by the railway system in the war. Whatever was leaving British ports bound for Europe had to be closely coordinated with what was arriving from across the Atlantic.

In addition to the railway companies’ preparations for the role they were to play in this, the army had been training in the use of railways during the invasion of Europe since the early days of the war. Land-based railway training areas for the army at Longmoor and Melbourne.

This book is a fascinating subject of the use of trains during World War 2 and is full of interesting facts that, to be honest, I had not thought about or even knew like before the start of World War 2, we were already having attacks to mainland Britain in the form of the IRA. The inspiration for the NHS supposedly, yet believable that a large company like GWR would have free medical care and that could have inspired the NHS. One thing for certain the people of the railway all them went above and beyond that of what their job description was and we know that included ordinary people during the whole of World War2, but particularly during the Blitz. The stories of individual heroic action you come across while reading the book, I have learnt so much from this book and if you have any interest in war, trains or history then this is going to be a great book for you. 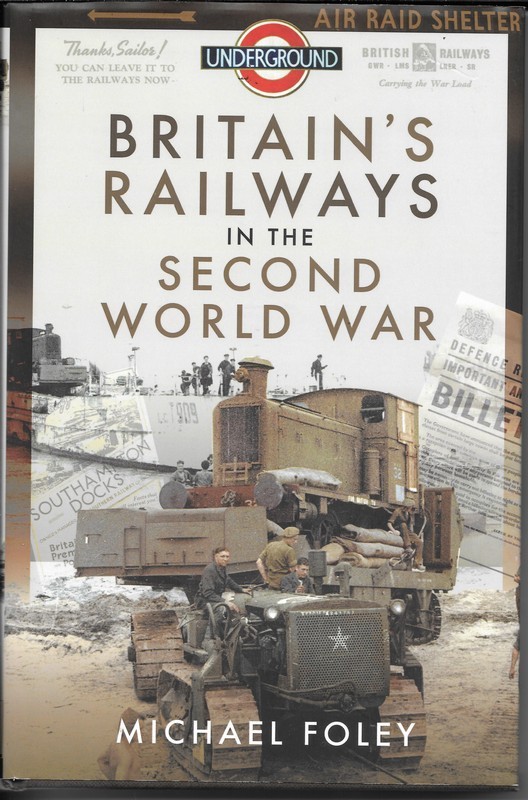 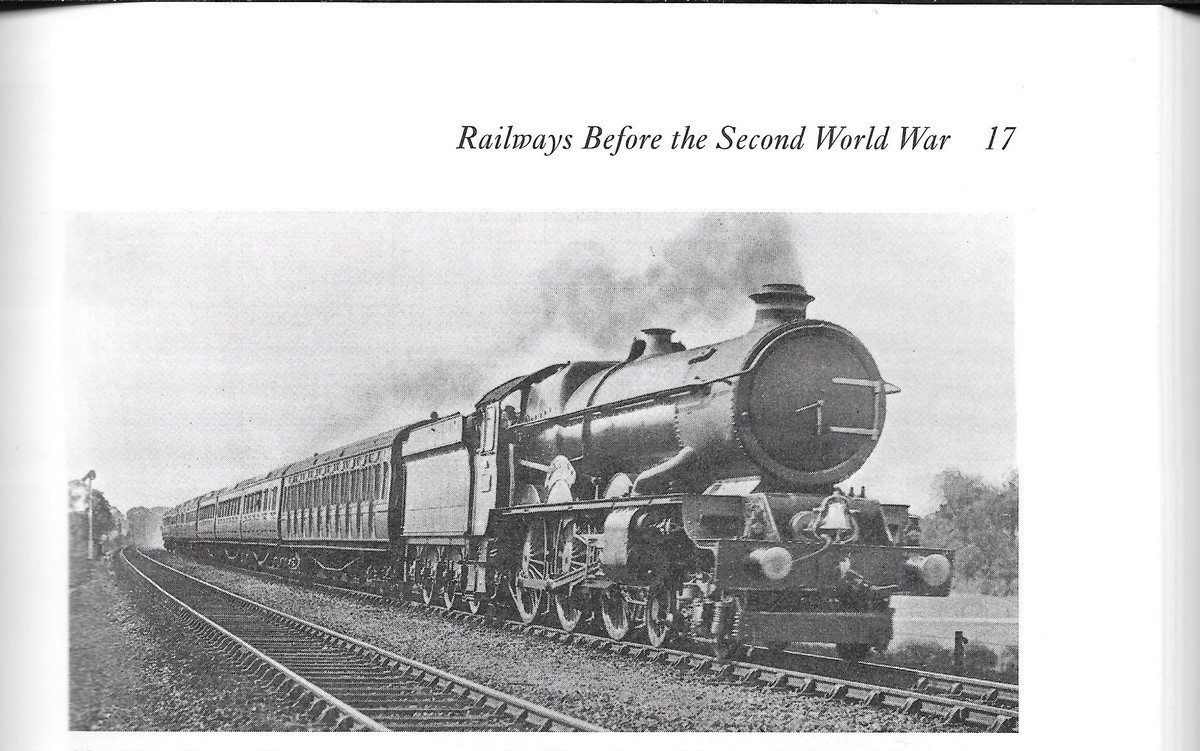 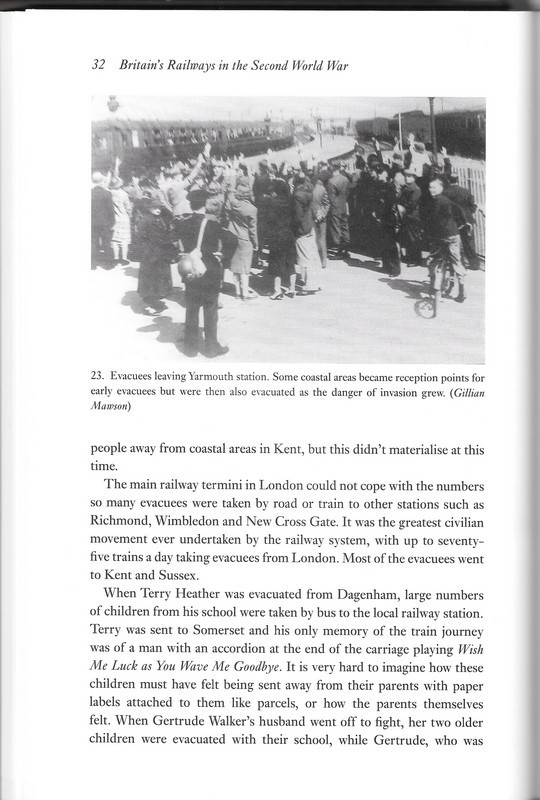 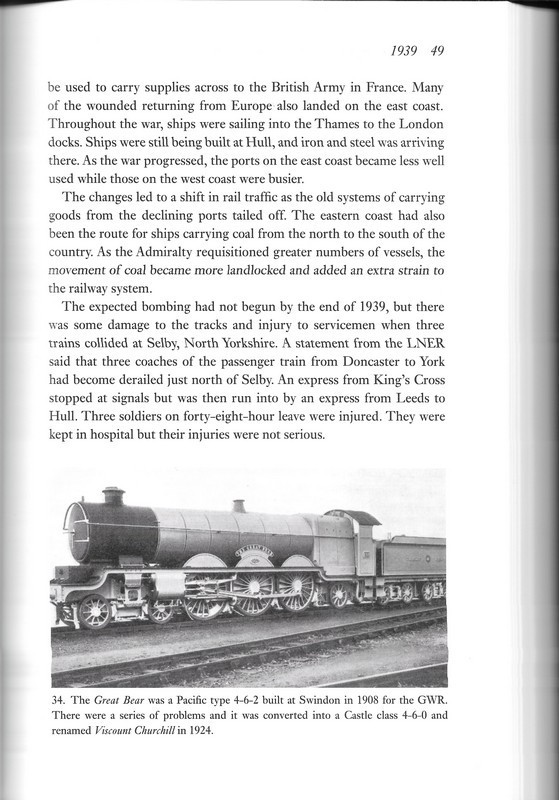 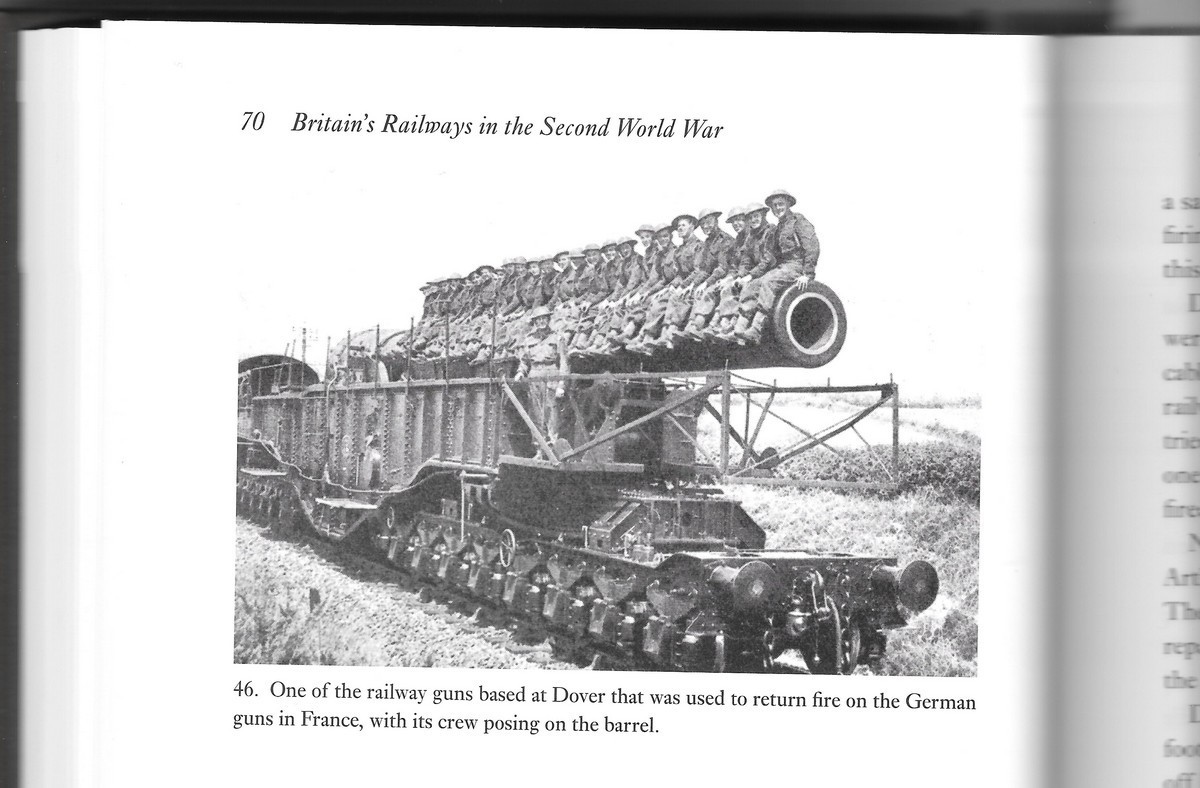 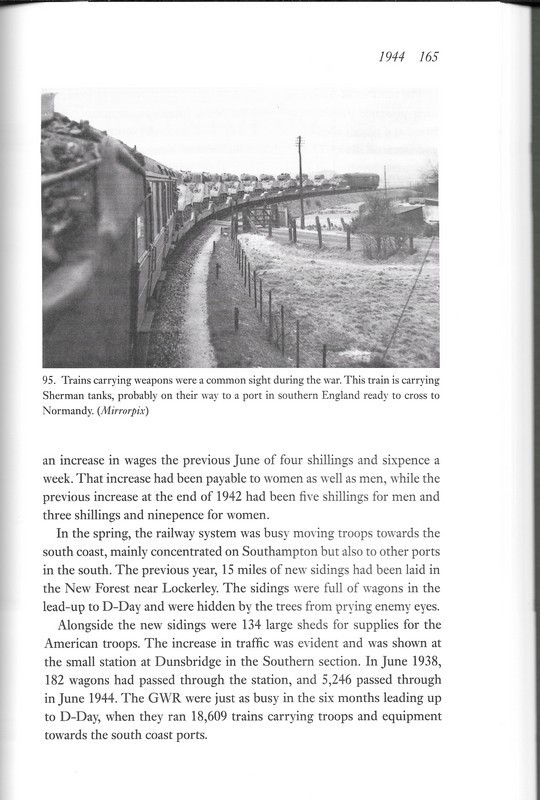 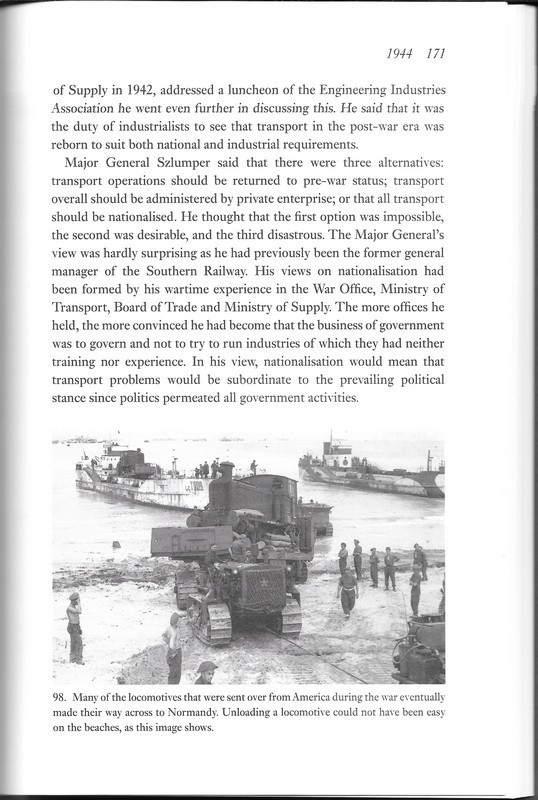 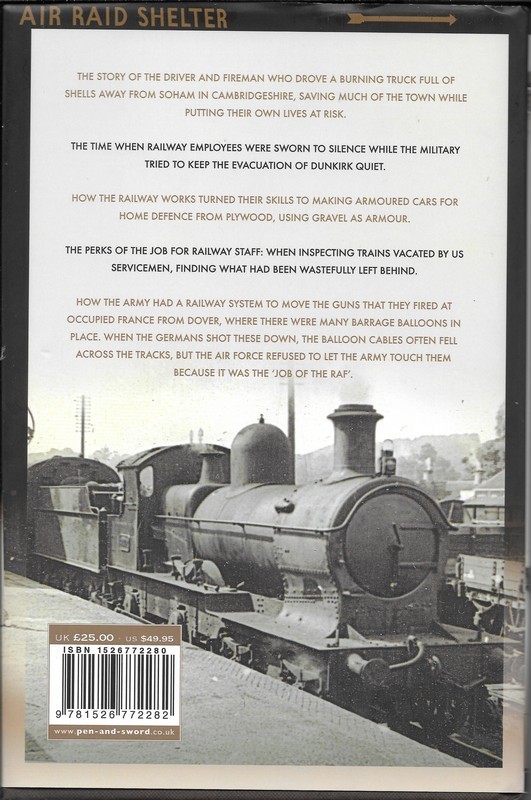