JPTRR
Editor
posted on 1 month ago — updated on 1 month ago
199
views
Special Run Announcement: Atlas O Premier Nickel Plate Russell Snow Plow for Atlas Authorized Retailer Mr. Muffins of Atlanta, Indiana. The plow will be very limited in production and is slated to arrive this Summer. Another Russel Plow is for Long Island RR. 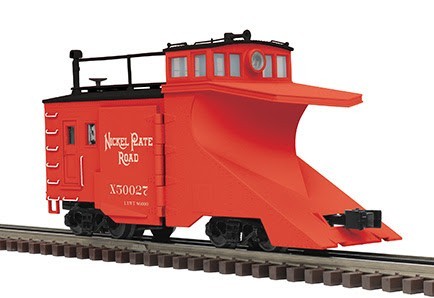 For railroads in much of the U.S. and Canada, dealing with snow is a perennial problem. The earliest railroad plows were likely derived from agricultural plows, and were the first instance of a plow being pushed from behind rather than pulled by horses or oxen. In 1840, little more than a decade after the first steam engine plied American rails, Charles Lowbaert was granted a patent for a wedge, or “bucker,” railroad plow. Like our model, that pioneering snowplow featured an inclined plane to bring the snow up off the rails and a pointed, triangular wedge to throw it to both sides of the track. Over time, railroad plows evolved into an arsenal of equipment ranging from engine-mounted blades to the ultimate snowfighting weapon, the rotary snow plow. 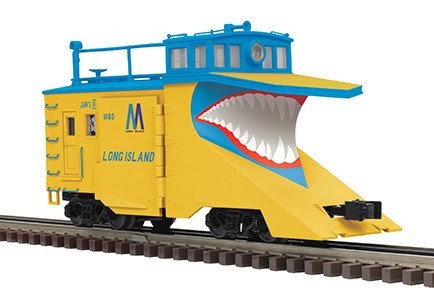